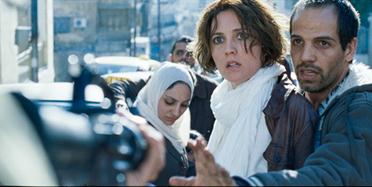 From those wonderful people who brought you Incendies and Monsieur Lazhar comes another politically tinged dramatic film. Incendies won international praise as did Monsieur Lazhar, which by the way I thought to be pretty close to being a perfect movie, so my expectations were very high for this one. It is about a young Quebec woman and physician who is working at a United Nations sponsored women’s clinic on the West Bank in Palestine. She lives in Israeli Jerusalem but crosses the checkpoint every day to Palestine to her job. The film does an admirable job of portraying the conflict between Palestinians and Israelis through this lead character who has friends and lovers on both sides. I began to lose touch with this film when the Quebec physician basically chain smokes (I do not know many doctors in this time who smoke) and basically lives a very wild lifestyle while all the time pining for her home in Quebec. Also there is absolutely no explanation of why she would volunteer to work in a highly dangerous location. Her motives are completely mysterious.

So having already lost confidence in the reality of the character I was further disappointed in her relationship with a Palestinian man who really has nothing to offer her except his leaning toward terrorism and rebellion. This all the while her best girlfriend is an Israeli border guard. I think the producers and director wanted to write a pro-Palestinian story and support the case by having it observed through the eyes of a Canadian/Quebec Physician. Not sure if there was some line to be drawn here between the oppressive condition of the Palestine and Quebec but I will not go there. Nonetheless, having lived in Israel (which colours my perspective I suppose) I was very disappointed with the way in which the current conflict is portrayed and very unhappy with the way it is played out in this film. There are two important scenes in this movie. One is when her Israeli girlfriend confronts her and asks her why she is even there. The second is when her Palestinian friend and patient tells her go back where she came from. Since this had been crossing my mind throughout the film, I almost said out loud, “Right! Go home.” Politics from this production group are not nearly as sophisticated as those of Costa-Gavras. Enough said. I cannot recommend this film – go see Gatekeepers instead.