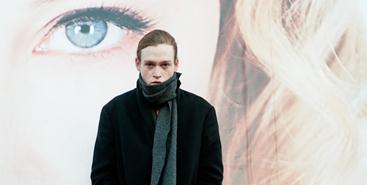 Yes you are reading that right. This is a film by David’s little boy Brandon (well he is 32 but…) and it shows. I am going to go a bit cranky with this. I had heard about it being shown at Cannes along with Dad’s newest film Cosmopolis. So I was curious. People have been very polite about this movie I think so as not to offend David and it is clear that Dad pulled lots of strings to get Brandon some attention like getting into Cannes, hiring Malcolm McDowell to do a cameo role and so forth. The film harkens back to the early Cronenberg films like Shivers and Scanners but to my mind it is more like an amateurish version of those early films. This is a bad movie and I am particularly upset that it left such a bad taste in my mouth after seeing Great Expectations that morning.

The premise of the film is that celebrity worship has gone to the point where people are actually marketing the viral infections of celebrities and injecting them into fans so they can experience their favourite stars’ illnesses. Of course it all goes horribly wrong. At the Q and A after the film the sycophantic host asked the first question: “Like, How did you ever come up with the idea for this movie?” and Brandon in sharp contrast to the wit and intelligence of Mike Newell (see Great Expectations) responded; ” Like I got the idea at film school when I was like really sick see? And like I was thinking I have this flu from some other person like? Like I am sharing it with someone or something. And then I thought well what if like we actually gave people diseases of their favourite stars? Wouldn’t that be like the ultimate fan worship?” So this trivial thought was turned into a two hour ordeal.

I am paraphrasing this dialogue a bit but I should note that the average age of the 1500 at Great Expectations was maybe 50 and the average age at Antiviral was more like 30. In line waiting to get in I was just in front of four or five young film makers who were talking about their like script and like how they really wanted to get this guy to come to their party that night so they could like impress their producer right? It was driving me like mad right? When I got into the theatre however I was sitting beside a elderly gentleman, yes older even than me, and we chatted about the festival and the films we had seen and as the room went dark and the movie started, he fell fast asleep. Believe me, he had the right response to this loser film.