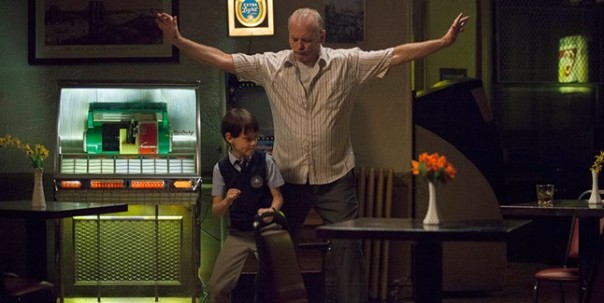 Hard to believe that this fall is the 30th anniversary of Ghostbusters, the classic Bill Murray comedy that stars Sigourney Weaver, Canadians Dan Ackroyd and Rick Moranis and the sadly missed Harold Ramis. Just to keep the record straight however there were four ghost busters and the one who is often forgotten is the black member – Ernie Hudson. However TIFF gave a full day to celebrate Murray’s film career with special showings of Ghostbusters, Stripes and Groundhog Day plus the premiere of his latest: St. Vincent. It is a wonderful film. Murray plays a curmudgeonly retired man who appears to dislike everyone and who is living on the edge of alcoholism and financial ruin. We learn more and more about him as the film evolves through his relationship with his new 12 year old neighbour. The film is funny without being silly, heartwarming without being too sweet, sad without being maudlin or melodramatic. My guess is it’s a real contender for this year’s People’s Choice Award. Bill Murray is a great actor who can move from comedy to tragedy with ease and grace and is a master of it all. This is definitely his movie although one must recognize the supporting roles of Melissa McCarthy and especially 10 year old Jaeden Lieberher who plays the twelve year old boy that Murray befriends. Tonight I will sit back and watch Wes Anderson’s The Life Aquatic for my own bit of Murray nostalgia.