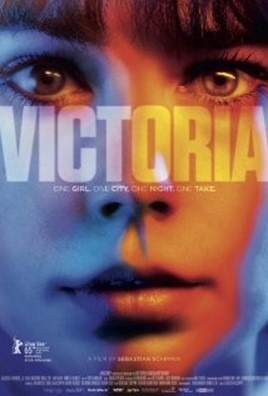 I am not entirely sure about this movie. It is not the best I have ever seen and it is a wee bit too long but all in all very entertaining. Victoria is a German film but most of the dialogue is in English. Set in Berlin it tells the story of a young Spanish student who hooks up late one night or really early one morning with four guys who are out for the night partying. What starts out as a fun encounter and a blossoming romance with one of the guys slowly turns darker as the guys are coerced into a bank robbery and the girl – Victoria – becomes the driver of the getaway vehicle. I will not give away the whole story but needless to say it all starts to go awry until the climactic ending. The characters speak English because the guys are German and Victoria is Spanish. The common tongue is English which they all speak relatively well and which makes for interesting dialogue.

What is unusual about this movie is that it all happens in real time and is shot in one continuous take. Apparently they did three versions and the final one is the one that was released. The dialogue is all ad libbed which is a credit to the actors since it is mostly in English which is a second language for them all. The pace of the movie picks up slowly over the time and ends in a rush. Great fun really and although one can punch all kinds of holes in the plot, the nature of the filming is unique and the story compelling so you really want to see how it all comes out at the end and definitely stay hooked. Not sure when this might be released. The film will be at several film festivals including Vancouver and Berlin and hopefully will get general release in the New Year if not before. Definitely worth the effort to see.