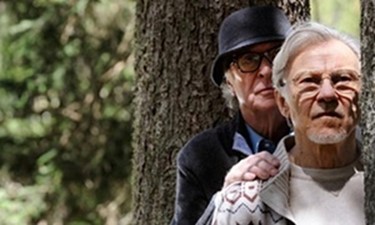 This film will likely be on the OSCAR track if not for best film then for best actor for Michael Caine. The director is Italian and noted for several previous films that were generally pretty depressing in theme and plot. They have been lauded for quality but not for fun. This film takes him in a new direction. The story is lighter than anything he has previously done and offers a theme of redemption. I found some of it very beautiful to look at, very funny in several places, moving in others, but he insists on inserting scenes and images that as far as I can see are a tribute to Fellini and have nothing to do with the plot or theme. Nonetheless I was entertained more than I was irritated and the acting is top notch. I am reminded at how effortlessly the old pros like Caine and Keitel can act while being impressed with the Paul Dano a young actor who has a great career in front of him.

The story is about two old friends, Caine and Keitel who are at Swiss spa to rest and regain health. Keitel is a film director and Caine a retired composer and orchestra conductor. Both have hidden issues in their lives that remain unresolved and which come to light in the course of the film. I can’t tell you how the plot evolves but will intrigue you with the fact that Miss Universe is also there and prone to walking about with minimal clothing, and a small subplot in which Caine and Keitel bet on the quality of the relationship between ta couple who eat dinner at table near them. The picture above has them observing a change in that relationship. All very funny.

On the whole a good movie and one that will be out this fall and worth the time to see.