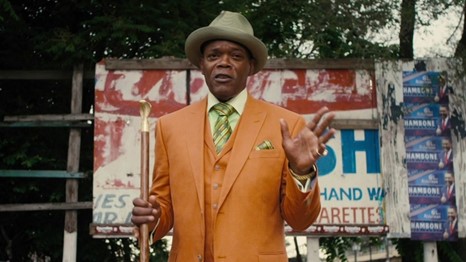 I have to admit I liked this movie despite being very suspicious based on reviews. Lee has based his anti-violence, anti-gun, anti-war movie on Aristophanes’ comedy Lysistrata. The Greek play is about an Athenian woman who acts to end the Peloponnesian War between Athens and Sparta. She allies with the women of Sparta to swear a vow and deny their men sex until the war is ended. The original play works well in the context of gang wars in Chicago. Samuel L. Jackson plays the chorus/narrator and is perfect in the part. The rest of the cast is great and the story really works. Have to admit I found the dialogue hard to follow at times but the story is great fun and while essentially a comedy, Lee makes his political points. Guns are killing young black men, children and other innocents. Lee makes it clear that it’s the guns that do the killing. He condemns the violent conflict and points to its origins in unemployment, poor education, and poverty. The latter points are made in a somewhat ham handed way but on the other hand the story is portrayed in a classical theatric format rather than the realism we might otherwise expect. Its stage play on film and works really well. Good fun and with a message that we all need to hear.