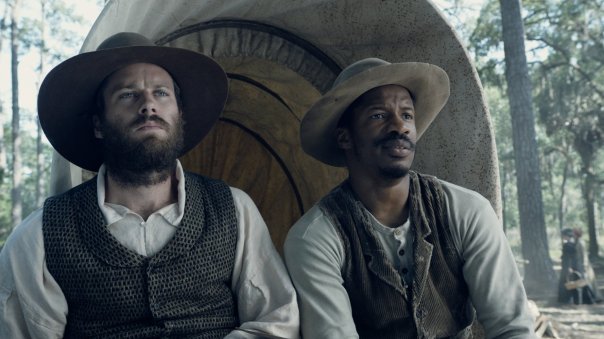 This review is hard to write. The film is controversial because of issues around the director’s past which includes allegations of rape 15 years ago when he was 18 and at College. While he was originally acquitted his friend at the time was convicted. The victim of the rape renewed charges but declined to testify and the case was dropped. The actors and others involved in the film have asked critics and audiences to separate the film from Parker the man and let the rape allegations evolve separately. The film itself needs to be judged on its merits alone. I agree with this and wonder at the timing of the release of the story about the rape at this time. It is not clear how the story broke. The victim herself committed suicide in 2012 nearly four years ago but the timing of the controversy re-emerging at this time seems deliberate and at this time all just allegations.  This is not to justify Parker or see him as an innocent but the film is important on its own merits and deserves to be judged on its own. That said, I am not sure the film deserves all the praise it is receiving. Parker is the producer, director, writer and lead actor and it is clearly a work of some passion for him. It is based on a true story of a slave revolt in the US South prior to the Civil War. I was disappointed with the acting, particularly Parker’s, and the film is long and not well constructed.  Again, this is not to say it does not carry an important message. I found myself tying the oppression it portrays and the anger of the response, to our own treatment of First Nations people here. The dehumanizing actions and co-opting of the oppressed to support their own suffering is common to all such situations and the angry but tragic response of the oppressed and its ongoing effects is well illustrated in the film. That is the message and worth seeing, hearing and reflecting on not only for Americans but for any who try to justify or dismiss the dehumanizing of others. This film is worth your time and it is OSCAR material – no question but the controversy surrounding its artistic lead is troubling and may impact a film that asks many important questions.