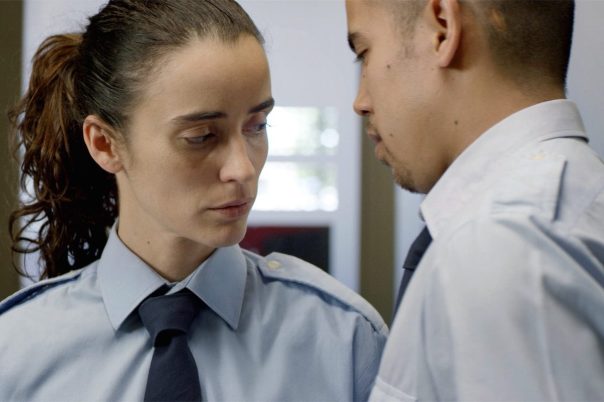 I downloaded these films from iTunes which assured me there were subtitles but as it turned out this was not the case and all the films are foreign made and except for Silent Nights, no English. Still it was amazing how much I was able to understand about the story with just the images to go by. So take my comments with this in mind. The films were longer than usual except for the Spanish entry and I am not sure I like that. Short films should be short but given Hollywood’s apparent need to make 2-3 hour films these days I suppose 30-40 minutes is the new short. I really liked the Spanish entry – Timecode—but it has had some negative reviews suggesting it is not serious enough. Well… I don’t agree that serious is a necessary quality and entertaining is what should count. See my review of Boogaloo and Graham from the past. Great movie and available on iTunes for only $3 or so. Give a watch and try to track down Timecode as well.

Zsofi is struggling to fit in at her new school – singing in the school’s famous choir is her only consolation, but the choir director may not be the inspirational teacher everyone thinks she is. It will take Zsofi and her new friend Liza to uncover the cruel truth.

A lovely film about kids and their bonding against some unjust authority. The revenge the kids take at the conclusion of the film is great and very funny. I would rank this as my favourite of the whole bunch.

Inger volunteers at a homeless shelter and falls in love with the illegal immigrant Kwame. Both live a hard life. Kwame finds comfort in Inger’s arms, but says nothing about his family and children in Ghana. When his daughter becomes ill, he is forced to steal money from the homeless shelter to pay the hospital bill. Inger believe his lie about the theft, and when Kwame moves in with Inger they are happy for a while… until the day when Kwame’s mobile phone reveals everything about his life in Ghana.

Not bad but not great and this one had some English in it as well.

Luna and Diego are the parking lot security guards. Diego does the night shift, and Luna works by day.

The image above is of Luna and Diego. A real treat and lots of fun. Two security guards – build a relationship through dance if you can believe it. Timecode refers to a defined video record on a video surveillance recording. Diego leaves Luna a note with a time code and when she looks at it he is doing an improvised dance during his regular patrol of the building. Luna responds herself and they communicate this way creating more and more complex dance moves. The end is them coming together and doing an amazing gymnastic dance routine witnessed by their boss and an new security guard. The final scene is very funny.

An interview at a local police station turns into an inquisition during which a French-Algerian born man sees himself accused of protecting the identities of possible terrorists. This close-up on France’s troubled history with its former colonies has one man controlling the fate of another with the stroke of a pen during a turbulent period in the 1990s.

Very good movie that makes you think of what is currently going on in the US under Trump and his authoritarian attitude to refugees.

Elise Lafontaine has a secret routine. Every morning and evening for many years, she has been waving at the express train that passes her house. One fateful day, she finds a letter from the train conductor in her garden and her lonely life is turned upside down. She engages in a promising correspondence through poetic and thoughtful letters two anonymous writers sharing their world with each other until the day the train line gets cancelled. The story is inspired by true events and stars César Award nominee Jane Birkin.

Not great. Fast forward through it.