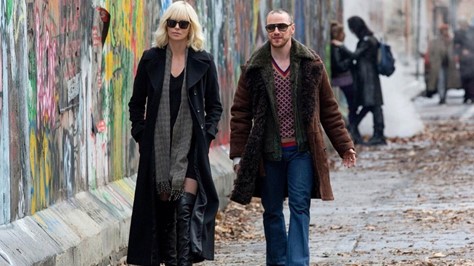 This is a movie just for fun. Based on a graphic novel set at the time of the Cold War, the story is about a literally kick-ass British MI-5 agent who is sent to Berlin to recover and bring back a double agent who holds secrets both sides want. The times in Berlin are complicated and agents from both sides have become self interested in the isolated world of West Berlin. No one can be trusted as it turns out even the people who sent Charlize to Berlin. This movie has no redeeming social importance whatsoever. It is not in the category of John Le Carre or Len Deighton in terms of accuracy about the Cold War or Berlin or secret agents but it is hugely entertaining. Charlize is supported by an superb cast including David McAvoy, Toby Jones and John Goodman and Sofia Boutella. The latter might be best known as Jaylah in Star Trek Beyond. You know… the alien with the great white and black makeup. I was inspired to buy the graphic novel and the film is totally true to it. Great trash.

If you liked the original Blade Runner you will love this sequel. Set decades after the first film you will find the dystopic future has not improved much. This time however our hero is Canadian actor Ryan Gosling and his director is also Canadian which in itself makes this a must see for all us north of Trumpland. Villeneuve clearly was a fan of the first film and his recreation of the world first dreamed of by Philip Dick in Do Androids Dream of Electric Sheep, is perfect in every way. What is really special is that that the story extends the themes and takes us in some new directions. To tell more would be to spoil what is a great story. This movie I think should have had a Best Picture nomination but instead we get 5 nominations for technical awards such as cinematography and editing. While this film definitely deserves these nods I think the nominators missed out on what is a very special film with a great story to tell. Nonetheless for quality production values and a really fun ride (and as a huge fan of the original) I cannot recommend this movie more highly. May it be blessed with some well deserved wins unlike its predecessor.

A comment – while some movies win awards and are celebrated over others, it is often the case that those winning films are long forgotten while movies that won nothing at the time are the enduring ones. Blade Runner is such a movie. Nominate for only two technical awards in 1983 and losing both to E.T. and Gandhi, I suspect Blade Runner will endure as a classic. While E.T. might also endure I would ask those reading this blog to put up their hands if they have even seen Gandhi or will ever see it again. See? No one. LOL.

Filmmaker Agnes Varda and photographer JR teamed up to make this charming film and while I think it is worth a nod for Best Documentary, it may lose out for not being political or serious enough. Together they tour the French countryside looking for places to put faces on. Sounds bizarre but JR’s latest thing is a van that takes giant photos and then he and a team post them on the sides of buildings, rail cars or whatever seems most appropriate. Sometimes it is just gratuitous and funny and sometimes it makes a political point but what makes this film special is the relationship between its two stars. Varda is in her 80’s and JR in his 30’s could be grandson. He clearly thinks she is something special as an artist and the friendship and mutual admiration that grows between them is great to see. For a relaxing but often thought-provoking documentary I cannot recommend it more highly. Enjoy.