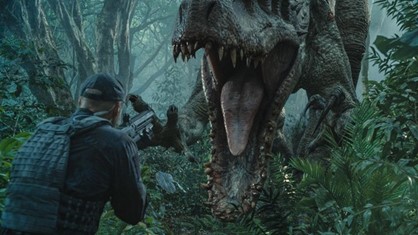 I had to watch this movie even though it is total attempt to make some money on the original. Still its really well done and the dinosaurs are really great. I especially like the battle at the end with the T-Rex. I really liked the original Jurassic Park which was something special. I remember going with my kids and their friends when they were quite young. The movie was so engaging that one of the kids remarked at the end wondering how they managed to control the velociraptors during the filming of the movie. Then realized what he had said. It just showed how completing engaging the film was. This time around it was sort of like the Star Wars reboot. Once you saw the original the sequel is always a bit disappointing but this should not put you off renting this one and enjoying a couple of hours of roaring and chomping. Very entertaining so it ranks as really good trash. Go for it if you like dinos.