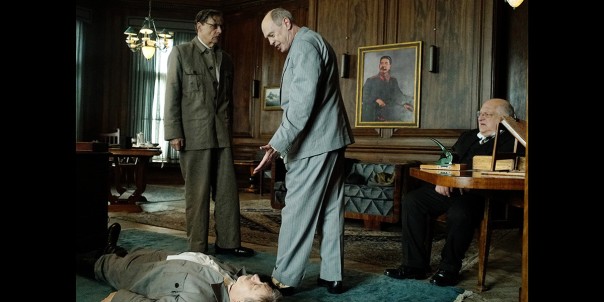 Armando Iannucci is the director of great political satire most notably VEEP starring Julia Louis-Dreyfus of Seinfeld fame. This movie is very much in that tradition. As satire both VEEP and this film move between comedy and making you feel slightly uncomfortable. This film tells the story of Stalin’s death and the subsequent events as members of the politburo fight for power and control. Stalin was one of the world’s most cruel and controlling dictators and his sudden death left a void that created a real crisis for the Soviet Union. The contest mainly between Khrushchev and Beria, the head of the secret service, was a devious and ruthless competition for power. Iannucci however manages to create a comic look at the struggle without taking away from the cruelty of the regime or the power struggle. The film did not shy away from the violence and reign of terror that Stalin created but managed to build comic relief and distraction in the relationships among the surviving members of the politburo. The cast is amazing including Steve Buscemi and Michael Palin among other lesser known character actors. The acting was smart with all the key roles contributing to the overall story. The Q and A was one of the best I have attended. Iannucci and four of the actors including Buscemi were there. Iannucci and Buscemi were particularly eloquent, funny and informative in their comments and we learned a lot about how the film was put together including rehearsals and use of improvisation when necessary. All in all an excellent experience and a film worth your time to see.