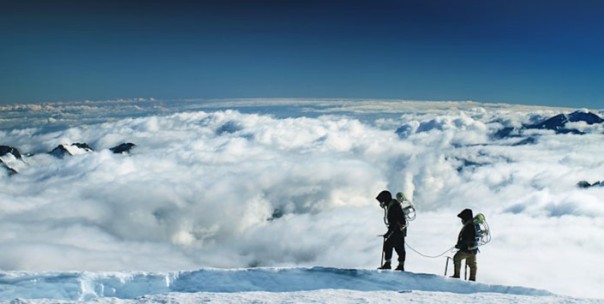 This was my first movie of the week and sadly not a winner. This is a New Zealand film by a relatively well known New Zealand documentary director and about a New Zealander – one Edmund Hillary. Hillary, for those who don’t know, was the first man to successfully reach the summit of Mt. Everest and this film is a docudrama of that expedition. I have to say that I really don’t have much use for mountain climbers. They are portrayed as heroes who risk their lives, as far as I can see, only to give themselves an adrenalin high. The trouble is they often put other lives at risk to do it and really to no end. I mean I think Neil Armstrong is a hero because going to the moon ended in the development of amazing engineering and scientific outcomes but climbing Everest to take a few photos to prove you were there is hardly the stuff of legend. At least in this reporter’s opinion. So, I hear you ask, why did you waste your valuable pass coupons on this film? Well… I guess I got hooked by the idea of understanding how they did it and I needed something to fill in Friday afternoon at the movies and this was the only thing that appealed – sort of. At any rate given my prejudice I was not disappointed. This was a pretty pointless movie. I knew Hillary made it, the film did not really make it appear all that challenging and the worst thing? It was shot in 3D and really poorly. So one more rant. I hate 3D movies. I wear glasses so the 3D glasses never really fit properly (and the ones at the TIFF Lightbox are the worst ever), the glasses darken the screen and take from the quality of the image and I almost always get a headache in these movies. The only movie I ever saw where the 3D actually worked was Life of Pi. Way to go Ang Lee but sorry Leanne Pooley you have a bit to learn. So there you go. Don’t bother watching this one if you get the chance.