Okay – I did not spend the entire week sitting in dark rooms with strangers. Today I went to see my youngest granddaughter play soccer in an end of season tournament. I couldn’t see all the games unfortunately but I did get to see the most exciting one. Her team was playing the “Red Team” who are very good but missing their two best players, known only as “The Twins”! They apparently were away for two weeks on a Disney Cruise with their parents. Nonetheless this team was very good even without their stars and my granddaughter, who I will call SW, sporting very classy yellow soccer boots was facing one of her greatest challenges of the season. The Red Team came out strong and by the end of the first half SW and her friends were down 2 – nil. Not to be fazed however they regrouped at half time and came out determined to do better. Within a few minutes they scored to cut the margin to 2-1. The Red Team was shaken but still had the advantage and looked to be able to hold on to the win until with a brilliant dash, SW broke down the field and with a look of determination drove the ball hard into the back of the Red Team’s net. A brilliant strike to rescue her team from defeat scoring the tying goal in the dying minutes of the game. Hooray!!!! Grandpa is super proud.

Rock the Casbah is set in Morocco and is all in French and Arabic with just a smattering of English. This was really fun to watch. Although if I tell you the whole plot you will wonder how I could have found it so. It includes a suicide resulting from a pregnancy from an incestuous relationship, a bastard son who only learns who his father is at the end of the movie, a father who has an affair with the maid/nanny who has lived with the family for 30 years, an estranged daughter who has run off to America and… well so it goes. Nonetheless the movie is charming, humane, funny, and very entertaining and it all works out in the end. The stars are the women (the mother, maid, and three daughters) and they all play an equal role in making the film come together. The members of this apparently dysfunctional family come together for a three day funeral event for their suddenly deceased patriarch who is, of course the source of all the problems, and who is played by Omar Sharif. How does Sharif play a dead person? Well he is the narrator and appears as a character watching the events of his funeral unfold and he is wonderful in the role. Over the three days of the funeral event the secrets all come out one by one creating division and distress but in the end bringing everyone closer together. There is a great scene near the end of the film with them all at a window welcoming the arrival of the American husband of the estranged daughter. His arrival of course brings the entire family together at last. At the very end with the entire family laughing and clearly reconciled, Sharif faces the audience and comments: When I was young, my mother told me: “Never cause a woman to cry my son because God will count all the tears.” He smiles and shrugs and shuffles off down the garden path. Lovely film.

Ron Howard’s new film” Rush” is about the infamous personal and professional rivalry between the two best Formula 1 race car drivers of the 1970’s – James Hunt of England and Niki Lauda of Austria. The performances by  Chris Hemsworth as Hunt and Daniel Bruhl as Lauda were great …and looking at Olivia Wilde is never hard to do. The people around me said she was sitting 2 rows in front of us and when that person left, it certainly did look like her. The movie was exceptionally good. Don’t miss it, unless racing car scenes that are probably unlike any ever seen before are not your thing. The true story is very well told and the F-1 race scenes are breathtaking. The movie keeps your emotions on a tightly drawn string pulling you from moments that have you laughing aloud to others that will find you with a huge lump in your throat or crying seconds after you were white knuckled from gripping your armrest as though you were the one in the driver’s seat of the Ferrari going 170 mph in a driving rainstorm. The packed house audience (at noon on a Monday I thought only old retired people would be found at the movies) (Hey Cal, this is TIFF!! – comment from P.R.) was made up of what looked like equal numbers of men and women of all age groups. The film received a thunderous and prolonged ovation at the end and everyone leaving seemed to agree they had been thoroughly entertained and would recommend this one as a “can’t and don’t miss experience”

“12,12,12” – the documentary of the Concert to raise funds for the victims of Hurricane Sandy  was great. It was the World Premiere of the film and was attended by Harvey Weinstein,the noted Hollywood producer who produced the concert and the movie. George Stroumboulopoulos led a very entertaining and insightful post film Q and A with Weinstein and 4 of the 5 other main producer/ directors(the only one missing was Paul McCartney who sent regrets at the last minute. The big screen and Dolby surround sound made both the scenes of the devastation of Hurricane Sandy and the on stage performances during the concert something special.It was a real treat to see and hear some very memorable musical moments offered by many including Bruce Springsteen, McCartney,( backed up by Dave Grohl( Nirvana )and the Foo Fighters, Pete Townsend and The Who, Pearl Jam, R.E.M., Coldplay, Billy Joel, Alicia Keys, The Rolling Stones (although Keith Richards and Ron Wood look like death warmed over, they can still play and rock hard – and it’s incredible to watch Jagger perform and  move on the stage like someone 50 years younger – yes 50! What a role model he is for some of us 😉
There is also a hilarious rendition if Leonard Cohen’s classic” Hallelujah! – performed by Adam Sandler (a performance which, IMHO, exceeds anything he has ever done in the movies)
If you get a chance be sure to see this movie – it’s worth it. 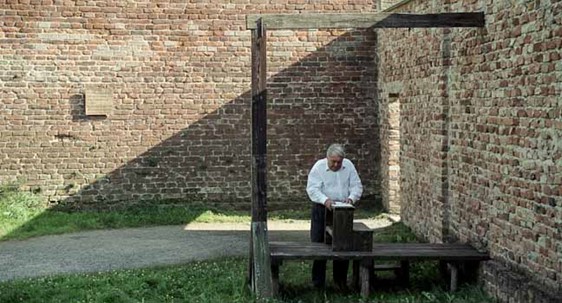 The Last of the Unjust was too long (4 hours) but excellent – a riveting history of the Nazi ghettos and the ruthlessness of Eichmann and the Gestapo- but it differs from most accounts in that the story is told by and focused not on the Nazis or their victims who did not survive – but on one who did – Rabbi Benjamin Murmelstein the chief Rabbi of Vienna when the Nazis occupied his city and destroyed every temple and every torah or other valued Jewish religious article they could find . Murmelstein was sent to a ghetto where he was appointed by the Nazis as   the “Jewish Elder”. the Nazis did this as one of many acts to camouflage what was really happening by making it appear as if their victims were really in charge of their own destinies in these ghettos when in reality these were nothing more than temporary stopovers for Jews then being packed up and herded onto trains taking them to the gas chambers . Murmelstein claimed he actually saved many lives by using a strategy that included making it seem he was befriending and assisting Eichmann and other Gestapo in some of their tasks and by carrying out many Nazi orders. While thousands were still exterminated, he says the need for his services and the trust that many of the Gestapo placed in him allowed him to spare the lives of many who would otherwise have perished. The price he paid for this was that he was seen by many of the Jews in the ghetto as being in collaboration with Eichmann and others in the Gestapo . He was the only Jewish Elder to not be killed by the Nazis and when he survived the war he had war crimes charges brought against him by other ghetto survivors. Although the courts exonerated him, his guilt remained steadfast in the minds of many of the ghetto survivors and the families of thousands who died. His story, documented  in this French subtitled film created by the producer/ director / narrator who is also a French Holocaust archivist , is an important addition to the history of WWII and the holocaust. But it should and could be edited to around 150 minutes max.