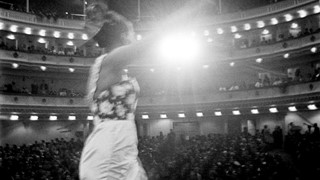 Okay I will confess I really like Liz Garbus. She has not made a bad documentary in her life that I am aware of including Love, Marilyn, The World Against Bobby Fischer and the Ghosts of Abu Ghraib. Go check them out if you have not seen them. This is another winner. The film uses interviews with her former husband and manager, her daughter and niece to great effect but the news footage of her and Stokley Carmichael and others is even more powerful. Nina Simone was an amazing pianist and jazz/blues singer who suffered from manic depression and who took a potentially super star career to the depths of despair as she fought against racism in the US in 60’s and 70’s. Her life was tragic but through it all her powerful voice, song writing ability and passion for her music and her community kept her alive and fighting. I cannot recommend this film more. It is nominated for Best Documentary and is up against a biographical documentary about Amy Winehouse which took the BAFTA Award this year. I don’t see it. However good “Amy” is she did not live long enough nor was she committed enough to warrant beating out this movie. In this year of ever so white Oscars they could take a mini-step in the right direction to recognize this champion of human rights and freedom.