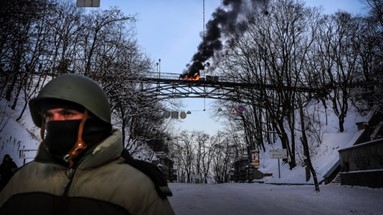 Not a great movie and likely nominated for the pro-Western political perspective it offers. The technique of the documentary is very in your face with no clear narrative but a collection of real life encounters with participants in the conflict. They include not only leaders but people in the street and so it is visceral in its impact. The director followed the style of a previous Netflix movie called The Square about the uprising in Egypt that focussed in demonstrations in Tahrir Square in Cairo. Both films take the viewer into the streets with the protestors and shows the conflict from that perspective. It is a powerful technique that builds sympathy in the viewers for those who are in the midst of the conflict. The problem in both cases is that it also simplifies the struggle going on in the country. In both situations and particularly in Ukraine the situation is not nearly as simple as it is portrayed. Ukraine is of critical strategic importance to east and west and is as a result the focus of much interference from both sides. This aspect of the conflict is not addressed in the film and so I am not entirely happy with it. I do not necessarily accuse the film makers of political propaganda but the film is of limited value because of its focus on the street alone. If you want to see better example of the technique however I would recommend The Square over this film.