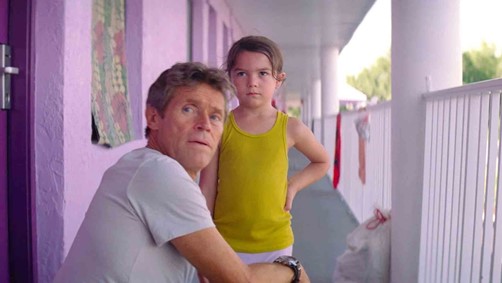 The Florida Project is an important film to see in these days of Trump and the GOP attempt to funnel wealth to the richest one percent. It is a dramatic film shot in a cinema verité documentary style we are observers of the lives of Americans living in marginal circumstances in a motel in Orlando. The film follows the children primarily who are all around age 6 or 7 as they pursue their lives around the desperation of their parents and other adults. Dafoe is nominated for Best Supporting Actor and he certainly deserves it. He plays the manager of the motel who must collect rent, maintain the building and suffer the abuse of his tenants, neighboring businesses and pressure from the owner of the motel. Despite the pressures on him he has sympathy for his tenants, the kids and watches out as best he can to ensure they manage in their circumstances. The kids, particularly the young lead Brooklyn Prince who plays Moonee the leader of the kids, are all totally believable and put in great performances.

I found the movie very hard to watch mostly because it is so true to the hard life of its characters. As I watched I could only think of the current circumstances of many Americans for whom the politics in Washington and the rantings of Trump are completely irrelevant to their lives. Clearly they do not vote so one cannot even blame them for supporting Trump and his nonsense. They are kept down and do not have the resources to rise up against the injustice of their society. Trying to think of some way to summarize my feelings at the end of the movie I found the summary on Rotten Tomatoes perfect: The Florida Project offers a colorfully empathetic look at an underrepresented part of the population that proves absorbing even as it raises sobering questions about modern America. So yes that pretty much sums it up.

Sean Baker deserves some comment. I did not know about him until I saw this movie but he has produced some excellent and well reviewed films previously that share a critical look at aspects of American life particularly that of the poor and immigrant populations. Look him up and try to see some of them including Tangerine and Takeout.